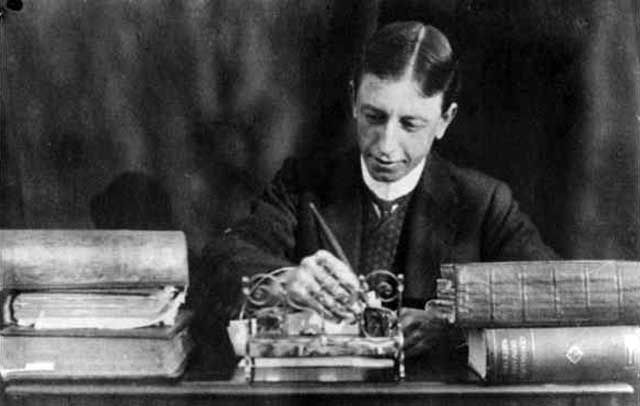 From ‘The Australian Dictionary of Biography, 1981’

Clarence Michael James Dennis (1876-1938), poet, was born on 7 September 1876 at Auburn, South Australia, first of three sons of James Dennis and his second wife Katherine (Kate) Frances, née Tobin, who was born in 1851 at Killaloe, Ireland. James Dennis, born in 1828 in County Cork, Ireland, had arrived in South Australia in the early 1860s, becoming the licensee of the District (later Auburn) Hotel. In 1880 he took over a Gladstone hotel, and in August 1889 the Beetaloo Hotel at Laura. C. J. Dennis began his education in September 1881 at Gladstone Primary School, where he edited the three issues of the Weary Weekly; he then attended St Aloysius’ College, Sevenhill, and Christian Brothers’ College, Adelaide, where he contributed to Interesting Scraps.

Kate Dennis died on 16 August 1890, and her two sisters cared for the children. C. J. Dennis left school at 17, becoming a junior clerk at an Adelaide stock and station agency and wool-buying firm, but was discharged for reading Rider Haggard during working hours. He then worked as junior law clerk with Jack Stockdale, a Laura solicitor. At 19 he published his first verse in the Laura Standard, and other early verse, including ‘Snakes’, appeared in the Register and the Evening Journal, Adelaide. He joined the Critic staff in 1898 for a year, but returned to act as barman at the Beetaloo Hotel. Following a disagreement with his father, he worked for eighteen months in various occupations at Broken Hill, New South Wales. His health failed and he returned to his aunts in Adelaide, where in 1901 he rejoined the Critic staff. His first contribution published by the Sydney Bulletin was ”Urry’ on 19 November 1903.

Dennis joined with A. E. Martin in launching the Gadfly on 14 February 1906; under various pseudonyms he contributed over 200 items of verse and prose until his departure for Melbourne in November 1907. His style and pungent wit, with verse often prefaced by classical or topical quotations, reminded readers of Thomas Hood and the American, Wallace Irwin. Other contemporary writers of similar verse were E. G. Murphy, W. T. Goodge and Louis Esson.

Dennis was a freelance journalist during 1908 but in meeting with writers, poets and artists ‘he expended his slight funds and slight physique much too carelessly, and in time his appearance fell far below the dapper standard of Gadfly days‘. Bouts of intemperance were to recur occasionally in later years.

Late in 1908 he camped with artist Hal Waugh at Toolangi, in the hills forty-five miles (72 km) north-east of Melbourne; this area was to be home for most of the remainder of his life. When he moved from the tent to a timber-getter’s house nearby he met R. H. Croll, who in turn introduced him in October 1913 to J. G. (Garry) Roberts and his wife. Roberts, who had a wide circle of literary friends, invited Dennis to camp in an old tramway bus at Kallista, and became his confidant and friend. ‘Den’ wrote much of The songs of a sentimental bloke at Kallista and dedicated the book to Roberts and his wife.

Backblock Ballads and other Verses had been published in 1913 by E. W. Cole but was not a financial success. The front cover was illustrated by David Low who shared a studio with Hal Gye. The book contained a ‘Glossary: for the use of the thoroughly genteel’—the forerunner of similar glossaries in four later works. Also included were four sections of The Sentimental Bloke, first published in the Bulletin, and ‘The Austral-aise’. This too had been published in the Bulletin, in 1908, winning a special prize in a national song competition; in 1915 it was reprinted with alterations, dedicated to the Australian Imperial Force.

After writing feature articles for the Herald and Weekly Times, Dennis worked in Sydney in 1914 on the Australian Worker and the Call. Following the declaration of war in August 1914, he was employed at the Navy Office and then became secretary to the Federal attorney-general, Senator E. J. Russell. In David Low’s studio he met Olive Harriet, daughter of John Herron, and they were married on 28 June 1917. She was the author under the pseudonym ‘Margaret Herron’ of My Dear (1928), Seed and Stubble (1936) and the biographical Down the Years (1953), and died in 1968.

The Songs of a Sentimental Bloke was published in October 1915; twelve of the fourteen poems had appeared in the Bulletin since 1909. It was an immediate success, requiring three editions in 1915, nine in 1916, and three in 1917; by 1976 fifty-seven editions had been published in Australia, England, the United States of America and Canada, covering 285,000 copies. A very human story, it was simply and humorously told in dialect verse which could be as easily spoken as read. Dennis said of this verse ‘that slang is the illegitimate sister of poetry, and if an illegitimate relationship is the nearest I can get I am content’. He had ‘tried to tell a common but very beautiful story in coarse, language, to prove—amongst other things—that life and love can be just as real and splendid to the “common” bloke as to the “cultured”’. Well produced by Angus and Robertson, the book had a foreword by Henry Lawson and appealing illustrations by Hal Gye, who was to collaborate on most of Dennis’s future works. Just as important was the timing of the publication; it reached a public depressed by enormous war casualties. Thousands of copies of the ‘trench’ pocket edition were sent to overseas troops. The work was widely recited, produced as silent (1918) and sound (1932) films, a stage play (1922), a musical (1961), and many gramophone recordings and radio and television programmes.

The Moods of Ginger Mick, a sequel to The Sentimental Bloke, was published in October 1916 in an unprecedented first run for verse of 39,324 copies. ‘The battle of the Wazzir’ was deleted from this work by the censor. Dennis was described at this time as having ‘the nervous and imaginative temperament, infused with a sense of humour, that comes of his Irish-Australian breeding. He is tall enough to look a small man straight in the eyes. He is of slight but enduring physique, and the lines about his clean-shaven mouth prove that he has learned patience and does not despair of learning wisdom. An aquiline nose and slate grey eyes give his face the quaint suggestion of a philosophic diagram, while a half-hidden twinkle suggests that it may have a humorous footnote. Dark hair is brushed straight back’.

Dennis considered that one of his best works was The Glugs of Gosh (1917). However the veiled political and economic satirical verse was lost on the public. A small Christmas 1917 booklet on Doreen proved popular but the prepared ‘Limpy Ben’ booklet for 1918 was not published. Digger Smith (1918) and Jim of the Hills (1919) followed. A Book for Kids, written and illustrated by Dennis, was published in 1921 and went to several editions.

Dennis had a flair for journalism and turned to the Melbourne Herald in May 1922 when he found that he could no longer live on income from his works. He contributed over 3000 times to a daily column during the next sixteen years. He also concentrated on various series, commencing with ‘The mooch of life’ and ending with ‘Ditties of debunk’. His series using Ben Bowyang in ‘Letters from the bush’ was also popular. The need to write topical verse within a limited timespan affected the quality of his work and the output of other material.

Rose of Spadgers was published in 1924 as a sequel to Ginger Mick. The Singing Garden (1935) was written around Arden, the house that Dennis had built at Toolangi after his marriage, and is the poet at his serious best. Arden was destroyed by fire in February 1965, but is commemorated by cairns and plaques in the still-existing garden.

Dennis had suffered from asthma for several years and died in a private hospital in Melbourne on 22 June 1938 of cardio-respiratory failure. His grave at Box Hill bears an extract from The Singing Garden:

Now is the healing, quiet hour that fills
This gay, green world with peace and grateful rest.