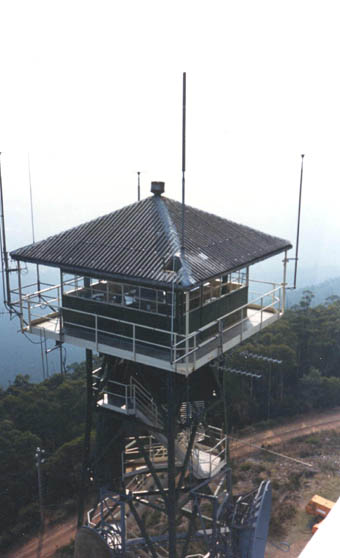 The current tower is a distinguishing landmark in the area. During the fire season it provides an excellent lookout and forms an important role in the early detection of fire danger. It also houses a wealth of communications equipment. The original tower was in the form of a small cabin perched precariously on top of a sawn off tree and held in place by wire and several cables. Access was by a long (scary) ladder.

This was replaced in 1949 by a steel structure. Its erection was not without its problems. The tower was constructed on the horizontal and then hauled up into place. Unfortunately the tractor initially employed for the cable lift lost traction when the tower reached about 45 degrees and the tower crashed to ground incurring some damage.

The base of the tower was 1027 metres above sea level and the height of the platform was 25.5 metres. It was constructed primarily by Melbourne Metropolitan Board of Works for the protection of the watershed. Originally power was provided by a diesel engine and generator until mains power was connected in the 1960’s. In 1988 this tower was superseded by the present larger structure built by Telstra to a height of 37 metres. This has the capacity to carry all the modern communications equipment. It has emergency services – Police, Ambulance, CFA, SES, NRE, Parks Victoria. It has mobile phone relay stations for Telstra, Optus, Vodaphone and Orange. Currently negations are underway to attach TV repeater stations.

It is a much sought after facility because of its central location and its panoramic line of sight visibility. The field of vision encompasses Mt Macedon, Wombat Forest, Strathbogies, Mt Torbreck, Baw Baw Plateau, Arthur’s Seat. With powerful binoculars cars can be picked out in the main street of Queenscliff.

The 1949 tower was cut down in height in 1991 and fitted with a platform which is now a lookout for the public. There is no public access to the new tower. The tower is now situated within the Yarra Ranges National Park which is managed by NRE, however the actual tower and its supporting structures have belonged to Telstra since 1994. Melbourne Water has retained ownership of the two top floors for fire spotting.